So many stacks, so little time. 7 reasons why you should learn Java.

So many stacks, so little time. 7 reasons why you should learn Java.

This article was originally published in 2017, with the latest updates in 2022.

“What is the best programming language” is one of the most heated debates in the software engineering industry. Everyone has their own opinion, and frankly, it’s all completely subjective based on the type of coding one enjoys.

If you’re considering learning to code to boost your career opportunities and income, it’s important to determine the type of software development you enjoy. Web developers who use languages like JavaScript thrive when a website looks and feels awesome, but cringe at the thought of endless hours crunching code on the server. While server-side developers who use languages like Java and C are less concerned with how a website looks – instead they thrive on the back-end logic and problem solving to make software applications work.

If you’re not sure, you can try coding for free on CodingNomads learning platform, to try out different languages like Java, Python and JavaScript. You can also consider the types of companies you want to work for, and research which languages they use.

With more than 250 programming languages in use today, and coding bootcamps teaching more than 100, at CodingNomads we teach Java because we’ve seen firsthand how versatile, transferable, and in-demand Java is across the world. Learning Java changed our lives for the better, and we’re passionate about sharing these valuable skills with our students. Keep reading to find out why learning Java could be one of the best decisions you ever make.

1. Java is the (second) most in-demand programming language

Every year since 2017 we’ve compile a list of the most in-demand programming languages based on LinkedIn Jobs postings in the United States and Europe.

In addition to the huge demand for Java developers, there is also a strong demand for Android developers, which use Java as the base language for native Android apps.

The graph below shows the top 10 programming languages by job demand. 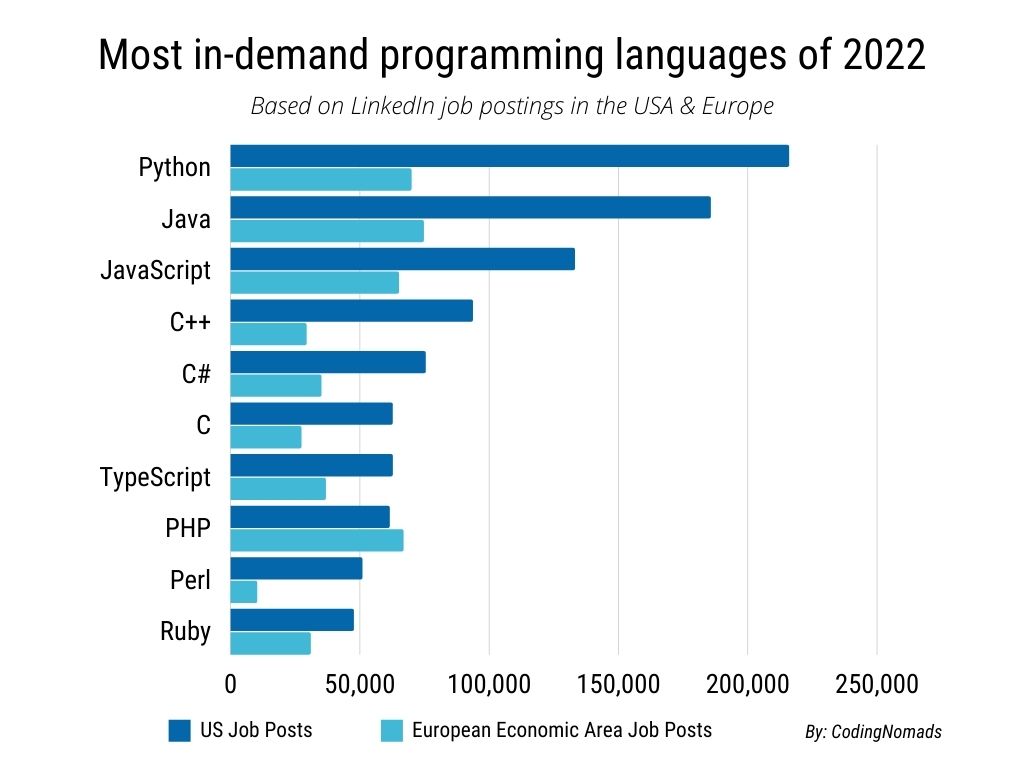 2. The sky’s the limit for what you can build with Java

Java was created in 1995 by Sun Microsystems as a platform-independent, open-source language embedded in various consumer electronics. Eventually Sun Microsystems was acquired by Oracle, with Java as the prized possession. Known for its security, versatility and its portability to run on any operating system, Java quickly became (and has remained) a game-changing technology used across various devices and various sectors.

Companies that Use Java

Java is used by companies in tech, government, finance, healthcare, insurance, education, manufacturing, defense and more. 90 percent of Fortune 500 companies use Java for their backend architecture. Yet because of its speed and scalability, many startups facing rapid growth use Java to power their tools too. According to iDataLabs 70% of companies that use Java are small (<$50M in revenue per year), 8% are medium-sized($50M – $1000M), and 15% are large (>$1000M).

Oracle estimates that Java runs on over 3 billion devices worldwide – more than any other language. A virtually omnipresent language, it’s used in devices such as smartphones, automobiles, medical devices and E-readers, as well as many of the world’s most prominent websites like eBay, Linkedin, Amazon, Facebook and Google.

Java is used for the Internet of Things and APIs, in big data technologies, e-commerce websites, high frequency financial trading platforms, and scientific applications. As mentioned, Java powers Android, which is the most widely used operating system on earth. It’s the brains behind Gmail, and is even in the Curiosity Rover on Mars.

Java is so widely used, that a video spoof was created depicting a doomsday scenario of what the world would be like without Java. It’s a bit silly, but exemplifies the depth and magnitude of influence Java has on our world.

According to Payscale.com, the median entry-level salary for Java developers is $62,000 USD. With a few years of experience, Java developers can expect to meet and exceed $100,000 USD per year. While salaries vary by company and location, Java salaries are consistently competitive with other common language developer salaries.

4. Java has a strong and active community

Oracle estimates that there are more than 9 million Java developers worldwide. Any developer can tell you the immense role the programming community plays in their ongoing education. When you are stuck, you turn to Stack Overflow, a programming question and answer platform. When you are curious, you browse code repositories on Github. The growth and success of any programming languages depends on its community of developers eager to share knowledge. Without this support system, a language simply wouldn’t survive.

GitHub is where developers store project code and collaborate with other developers. Java has the most active repositories and developers of any programming language, with more than 2.4 million GitHub repositories associated with Java, and 133,000 active Java developers.

Java ranks #2 in the The PYPL PopularitY of Programming Language Index, which analyzes how often language tutorials are searched on Google. According to PYPL, “the more a language tutorial is searched, the more popular the language is assumed to be.” We certainly agree! 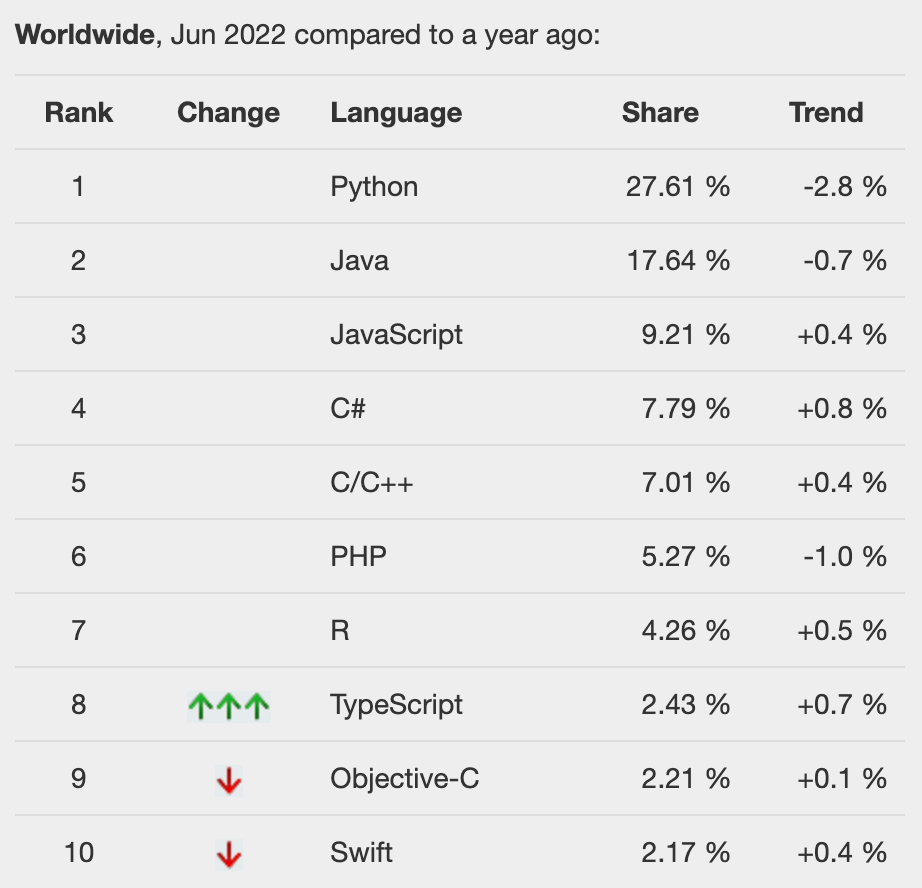 Whether you want to build your career at a large firm or a small start-up, the community of Java developers will play a critical role in your growth as a professional. With Java, you’ll have thousands of trained and experienced mentors just a click away. And because Java is used so widely around the world, this community is built to last!

Many aspiring software developers want to learn the newest, hottest technologies. However in such a fast-paced, evolving industry, you don’t want to spend time and money learning a language that will be outdated in a few years. With more than 20 years of breadth and depth of use, Java will undoubtedly remain in demand for the generations to come.

Additionally, after you learn Java, learning other languages becomes much quicker and easier. This is why Java is often the core programming language taught in many university Computer Science (CS) programs throughout the world. While the first language you choose to learn doesn’t necessarily dictate the language you’ll specialize in forever, making an informed and strategic decision will set you up for immediate and long-term success.

Learning a versatile language like Java opens the doors to jobs in all fields of the booming tech economy. Understanding that not all students know what kind of job they want upon completion of our Java coding bootcamp, we prepare students with a solid foundation that paves the way for ample work opportunities upon graduation.

Java evolved from the languages C and C++, which are also still widely used today. While Java shares some functionalities with C and C++, it has evolved into a much more beginner-friendly language. For example, Java handles many of the tedious, complex tasks such as memory management and pointers, making it easier to write and run for new programmers.

Java brings an Object Oriented approach to programming, which allows even the newest Java developers to start modeling the world around them in code, and thinking like a developer.

Object oriented programming also makes it easy to maintain and modify existing code, meaning that even beginner programs can begin to work on enterprise projects.

While Java is sometimes criticized for being verbose and inflexible, these traits can actually benefit new programmers. Because Java is checked for errors before running, new developers are less likely to come across unknown runtime errors. Additionally, Java forces developers to define all aspects of their code carefully, leaving less room for errors as programs grow.

7. Java gives you a competitive advantage

According to coding bootcamp industry research conducted by Course Report, only 12% of coding bootcamps teach Java. 67% teach “client-side” or web application languages like JavaScript and Ruby, and some bootcamp graduates have complained that the industry is flooded with web development bootcamp grads.

So doesn’t that mean that Java bootcamp grads are now in competition with university CS graduates? In short, yes. However our curriculum goes far beyond what you learn in university.

While a university degree is always an asset for finding work, unfortunately today, university programs do not adequately equip their graduates with the day-to-day skills needed as a working software engineer.

When CodingNomads’ co-founder and Java curriculum developer Ryan Desmond got his first job after obtaining his CS degree, he had to learn practical software engineering tasks on the job, and on the fly. As employers today value the work you can do over the credentials you have, our job-focused curriculum helps successful Java bootcamp students stay competitive, even with university graduates.

Our curriculum goes deep into Java, SQL, object oriented programming, data structures & algorithms, database management and more. From our years in the professional workforce, we know firsthand that this well-rounded combination of skills are needed by employers today, and will differentiate CodingNomads students from the rest.

READ NEXT: How to find a job after a coding bootcamp